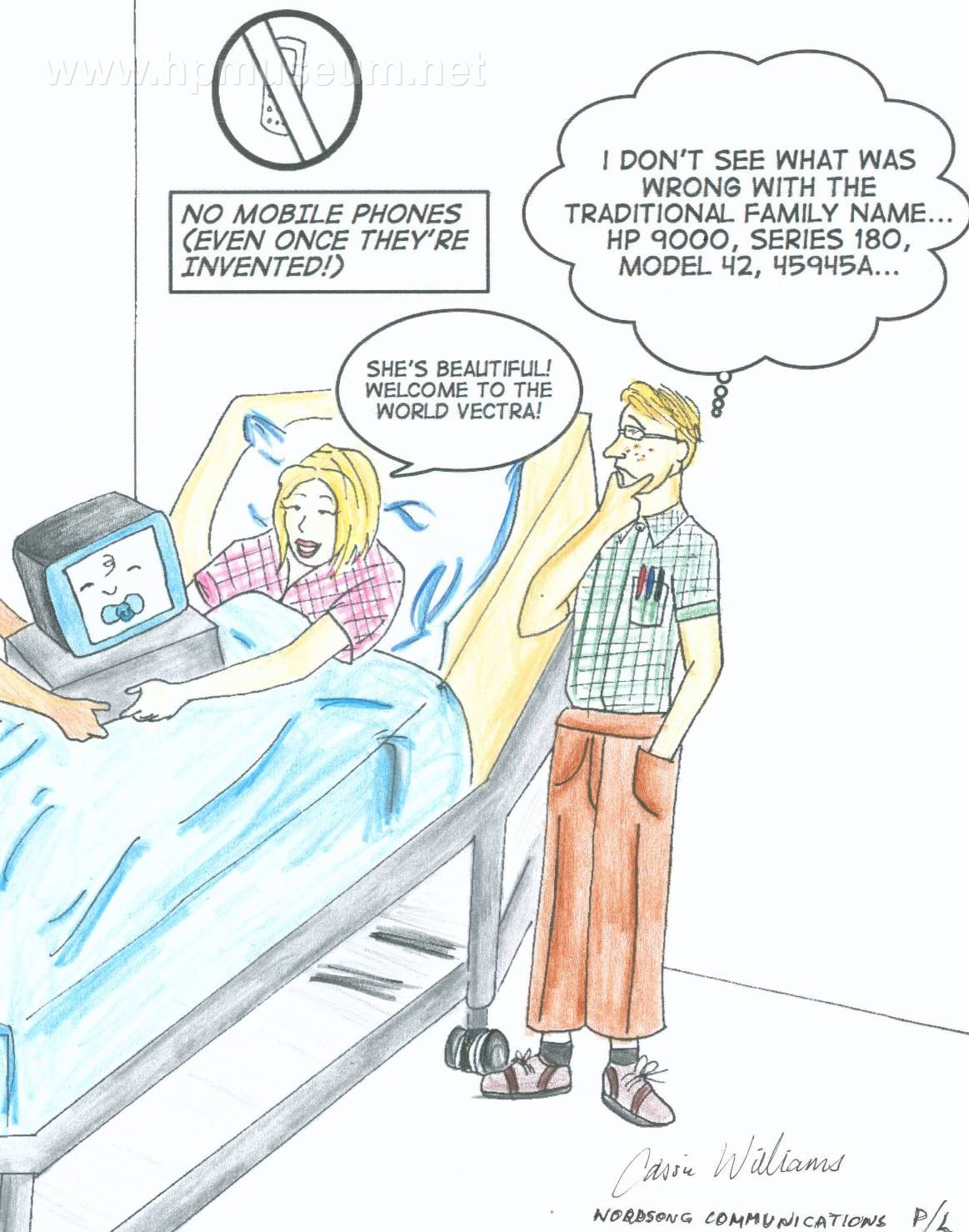 Initially, products were given numbers only. The purpose of the product number was to identify a product for ordering and to differentiate it from other products. No attempt was made to establish product brands within the computer business. This made sense since HP had no retail products and most customers were either engineers or scientists.

Shortly after the introduction of the 21-MX computers, HP decided to refer to all of its current technical systems computers as "HP 1000s". In addition to having its own model number, each computer would also be part of a "Series" of computers of shared technology (like "M-Series", "F-Series", and "L-Series"). This nomenclature was maintained until the HP 1000s were discontinued in the 1990s.

HP's first desktop computer, introduced in 1968, was the 9100. Interestingly, the “9000 series” product numbering scheme evolved into a naming scheme for HP technical desktops and Unix servers. The 9000 naming scheme was in use into the 2000s.

The HP product line that suffered the biggest naming identity crisis was the series 200 computers. HP had already introduced a low end technical desktop range built by its Corvallis Division; the 80 Series. The 80 series was the first of the desktop computers to abandon the 98XX numbering scheme. HP's Fort Collins Division introduced the 200 series with the 9826 in 1981, following the traditional 98XX numbering scheme. The 9826 was a replacement for the 9825 (although both products continued in production together for a few years). The next model in the 200 series was the 9836, followed by the 9816 and others. Realizing it was running out of 98XX numbers, HP adopted the “Series 200 Model XX” naming system. So, the 9826 became the Series 200 Model 26. The 9836 became the Series 200 Model 36.

HP's previous high-end technical desktop computer had been alternately referred to as the 9845 or simply the “System 45”. Unfortunately, the new naming system didn’t solve the issue of an impending shortage of numbers. Only two digits were available to identify individual model numbers. Also, HP wanted to keep the “9000” theme for all its technical desktop computers. So, HP introduced another change to the naming scheme of this series of computers. The final naming scheme adopted was “HP 9000 Model 2XX” for the 200 series computers. The 9826 started life as a 9826 and ended as The HP 9000 Model 226, a much longer name and certainly more impressive (imagine the patience customers would have required had HP adopted an even longer naming scheme like “HP 9000 Series 200 Model XX").

HP products also ended up with interesting model numbers for purely marketing reasons. By 1983, most HP 1000 computers sold were part of the "A-Series". The A-Series was launched in 1982 with the A600 models and higher-performance A700 models. In 1983, HP introduced a new A-Series computer. According to Todd Poyner, the marketing department decided that the new model's performed so much faster than the current models that it should be called "A900", instead of the originally planned "A800". When the last of the A-Series computers was introduced in 1990, it had to be called the "A990".

In the early 1980s, HP computers still had no personality. All products were known by their numbers. The first computer to be given a name was the HP 150 Touchscreen computer. Just to be safe, it’s name included a model number as well (150), in addition to a part number (45611A). The Touchscreen was HP's first MS-DOS computer, although not IBM compatible. Its primary hardware differentiator was the infrared beams of light traversing its screen that allowed screen cursor positioning through touch. This feature was the marketing cornerstone of the computer, so “Touchscreen” was a natural name. The replacement for the HP 150 Touchscreen was the HP 150II Touchscreen, although for these machines, the touch screen feature was a rarely-adopted option. The Touchscreens were replaced by HP's first (almost) IBM-compatible PCs – The HP Vectra. All subsequent HP business desktop machines carried the Vectra brand name, until the low-end "Brio" PCs were introduced in the late 1990s.

The most interesting product names came out of HP's Peripherals Group. HP's first name for a printer was its best – the ThinkJet in 1984. The ThinkJet was a very clever play on the new printing technology (thermal inkjet). Although the ThinkJet offered many advantages over conventional impact dot matrix printers, the most noteworthy was its quiet operation. So, HP named its second generation inkjet printers QuietJets. The brand name DeskJet followed the QuietJets in 1987, and it is the DeskJet brand name that survives today.

The ThinkJet name was so good, HP's Boise Printer Division adopted the name’s suffix for the introduction of the blockbuster LaserJet printer in 1984. "LaserJet" was undoubtedly the strongest brand ever created by HP. All subsequent laser printers from HP carried the LaserJet name. The printers that followed were differentiated by…….numbers, of course! First came the LaserJet II, then the LaserJet III, then the LaserJet IV. During the life of the LaserJet III, the original LaserJet became known as the LaserJet Classic. A new technology came with each new version of the early LaserJets. The LaserJet III had Resolution Enhancement Technology (RET) and PCL5 language; the LaserJet IV was HPs first 600dpi printer. These products were part of product lines. For example, the LaserJet III series included the III, IIID, IIIP and IIISi. These models were not replaced at the same time when new models were introduced. So, it was common for one or more III series models to co-exist with IV series models. This was a marketing no-no since the lower numbered models carried the connotation of older technology. So, after the LaserJet V series, the numbers jumped into the thousands (eg LasetJet 4000).

The “Jet” suffix became a name requirement for all HP laser and inkjet printers by the time HP's first color printer was ready for market. So, the prefix “Paint” was decided for the PaintJet. HP produced three generations of the PaintJet (PaintJet, PaintJet XL and PaintJet XL300) before all inkjet printers adopted the DeskJet brand in 1994.

HP applied the “Jet” suffix to its brand naming again when it entered the scanner market in 1986. HP's first scanner was the very-successful ScanJet, and a brand name carried by all subsequent HP scanners, excluding multifunction products.

The only small-format HP pen plotter ever to have a name was HP's last - the ColorPro, introduced in 1985. HP continued to introduce new large-format pen plotters through the end of the 1980s. These machines carried the brand names DraftPro (low end) and DraftMaster (high end).

The only impact printer to be named by HP in the 1980s was the very inappropriately named Ruggedwriter. The Ruggedwriter proved to be one of HP's most unreliable products ever.

HP did not name any mass storage products in the 1980s. Even the external floppy drive companion to the Portable had a number only – 9114. HP's mass storage brand name “SureStore” appeared in the 1990s.