The 2621B was introduced in November of 1981. This terminal was developed by HP in Grenoble. The development team consisted of: Jean-Pierre Pillou, Joel Setton, Jacques Lacroix, Yves Bonfort, Jean-Loup Gauthier and Jean-Marc Julia. By the middle of 1983, the 2621B had proven to be HP's most reliable terminal ever. With 2,000 hours of usage in a year, the average 2621B would fail once in 10 years. The 2621B used significantly fewer components than the 2621A. The 2621B included only a single processor, whereas the 2621A had three separate processors. 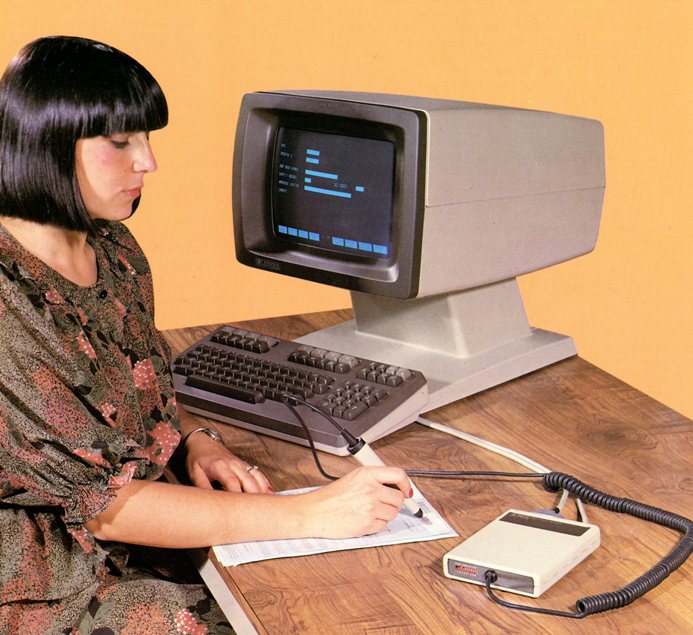 Unlike many other HP products, you cannot change the rated AC input voltage for these terminals via an external switch and fuse slot. To change the voltage rating, remove the top case and power board at the rear of the terminal. The power board has either a jumper or switch for changing the voltage rating as well as a replaceable fuse. While you have the power board out, you will want to replace the metalised paper capacitor(s) on it as they are prone to failure (and smoking) with age.

Almost all 262X Series terminals have an affliction that looks like "screen mold". These spots are unsightly and can affect the viewability of the screen, but they have no affect on functionality. The "screen mold" is not actually mold, but a degradation of the glue layer that holds a glass cover onto the terminal CRT. A procedure (including photos) for fixing this problem is outlined on the 9835 page.

Almost all 262X terminals suffer from moderate to severe UV fading of the housing. You can restore the original color of the terminal using Retr0bright or an Australian product called Orange Power Sticky Spot and Goo Dissolver.