The 150 (code named "Magic") was introduced with great hoopla in October, 1983. It was HP's first MS-DOS PC, equiped with an Intel 8088 CPU. The market was already crowded with MS-DOS PCs, and vendors tried to differentiate their products with unique hardware features. In an attempt to make its offering easier to use, HP built in a touch screen feature to the 150. This allowed users to use screen-touching to replace many commands that would otherwise require the keyboard. The touchscreen feature consisted of a series of vertical and horzontal infrared light beams that crossed just in front of the screen. One of these vertical and horzontal beams was broken when a finger touched the screen, positioning the cursor at the desired location (or activating a soft function key).

Encouraged by a study HP commissioned from McKinsey and Company, HP hoped to gain up to 22 percent of the PC market in the US within a year using the 150. But, the machine was priced over $1000 more than the IBM PC and ran non-standard software. HP managed to sell 40,000 units that first year, half of which were used as terminals on HP system computers. 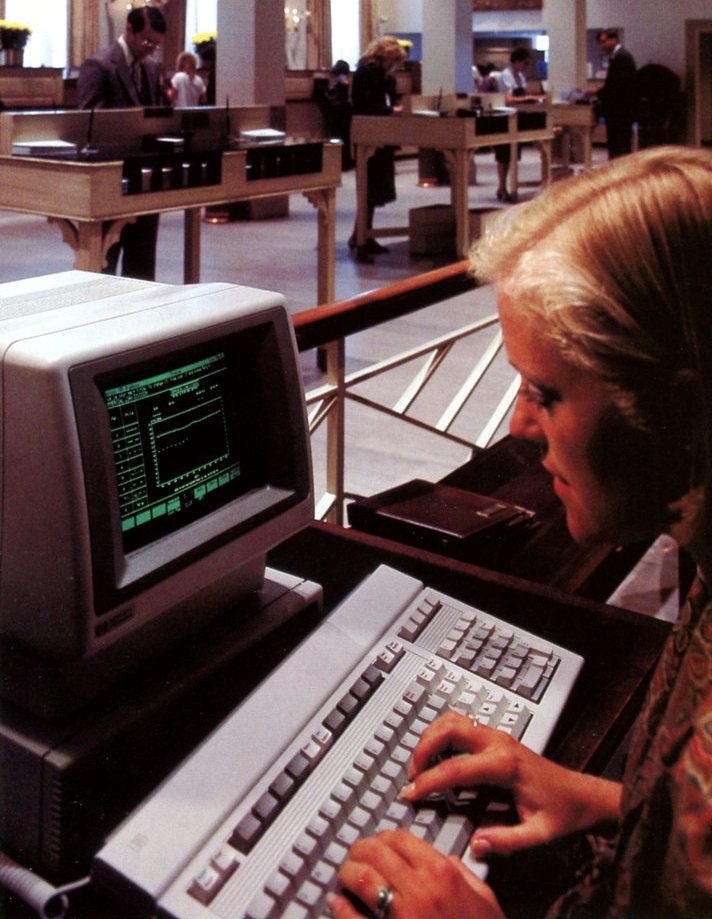 150s are fairly reliable. About 70 percent of the units we see are mostly if not fully functional. The most common problem we see is a dead screen, usually caused by a power supply problem. It is also not uncommon for the touch screen feature to stop working - this is typically caused by dust building up in the bottow rows of IR LEDs/receivers and gives a Power On Error 1000. While blowing compressed air into the holes along the bottom of the screen can sometimes fix the problem, it may be necessary to disassemble the unit and clean out each hole with a fine pick and some contact cleaner to loosen the fluff in teh hole. In same cases, the actual IR LED and phototransistors can also be bad. The cameras on mobile phones can be used to check the functioning of the LEDs - but they are quite dim. These computers are not entirely intuitive to work on and require a little patience. When you turn an old unit on, it takes awhile (usually over two minutes) for anything to appear on the screen, even though the fan starts up immediately. The 150 also has a lot of configuration screens, explained in the documentation. The most important configuration screen to get right is the global configuration screen. The unit must be configured as a computer (rather than a terminal) in order to boot up. If configured as a terminal, the 150 won't look for mass storage devices from which to load the operating system (and won't prompt you to do anything about it). Be sure to have your operating system mass storage device set to HP-IB address 0. No test or keyboard command will tell you directly how much memory your 150 has. The "Memory Test" fuction will give you this information, but in a way that you need to interpret. The Memory Test will give you a range of sequential digits in the lower left part of the screen ranging from 0 to 9. The number of digits present will tell you how much memory you have (see manual) and which sections are working. Batteries (N cells) are common and easy to replace but if left in the unit too long, they will leak which can damage the video board they are mounted on - this often makes the board irrepairable due to corrosion in and under the nearby ICs.