Design and development of the 2116A was completed in a single year - lightning speed by product development cycle standards of the day (and also a good case study of effective organisational structures). This new computer was accompanied by a full suite of software at introduction, also very unusual for the time. The 2116A could be programmed in either FORTRAN or assembly language. The 2116A was the industry's second 16-bit minicomputer (Computer Control Company's DDP 116 introduced in April, 1965 was the first).

The 2116A featured a large cabinet with 16 expansion slots for connection to HP instruments. Most computers of the day required controlled environmental conditions in which to operate. By contrast, the 2116A was designed to operate in temperatures up to 55 degrees Celsius and in relative humidity up to 95%. Each 2116A computer ran extensive diagnostic tests inside an environmental chamber. The machine had to run error free for 60 hours with both the temperature and humidity changing every few hours. If a computer failed, the technician would remove it from the chamber, take it back to his work station and repair it. The computer was then put back into the chamber and the clock was reset to zero. Some computers were in the chamber for over a week before being sent to final quality control. When the chamber was on the high humidity cycle, you could wipe your hand across the top of the cabinet and it would be dripping wet. The environmental chamber held only the 2116A computer box and nothing else (Fred Allard). It was capable of holding approximately 15 computers at one time. The 2116A was much smaller than most computers of the time because it was designed with the new integrated circuit technology. Memory technology was magnetic core. The 2116A came standard with 4096-word memory, expandable to 8192-word (and up to 16384-word with the accessory memory extender). The 2116B came standard with 8192-word memory, expandable to 32768-word with the external extender). In its first year of production, only five 2116A computers were sold outside of HP, all by Dick Slocum in the Eastern Sales Region. We have one of these original units in our collection.

At the beginning of 1970, HP decided to build its own core stack memory, rather than to continue to OEM this component from Ampex. HP's Fred Allard had previously worked for Ampex Memory Core Division in West Los Angeles and was asked to help with the implementation of building the first HP memory. The objective was to incorporate the 8K core stack onto the plug-in circuit board with its integrated circuitry surrounding it. It was common in those days to use 22 mil cores in memory stacks with four wires running through each core. To gain core switching speed, HP decided to use 18 mil cores in the stacks. This presented another problem because four wires will not fit inside an 18 mil core. The inside diameter of the core was too small. HP solved this by using only three wires through every core. The fact that one of the wires (the sense wire) could also be used as an inhibit wire made this possible. The 2116C incorporated these new plug-in core memory modules, the same modules used in the 2100 computer.

Click here for a video on our 2116A, restored by David Collins in celebration of her 50th birthday.

Click here for a detailed look at the origins of the 2116.

Click here for detailed information on the hardware configurations of the A, B and C models.

Click here to review Tim Riker's progress in refurbishing a 2116A. 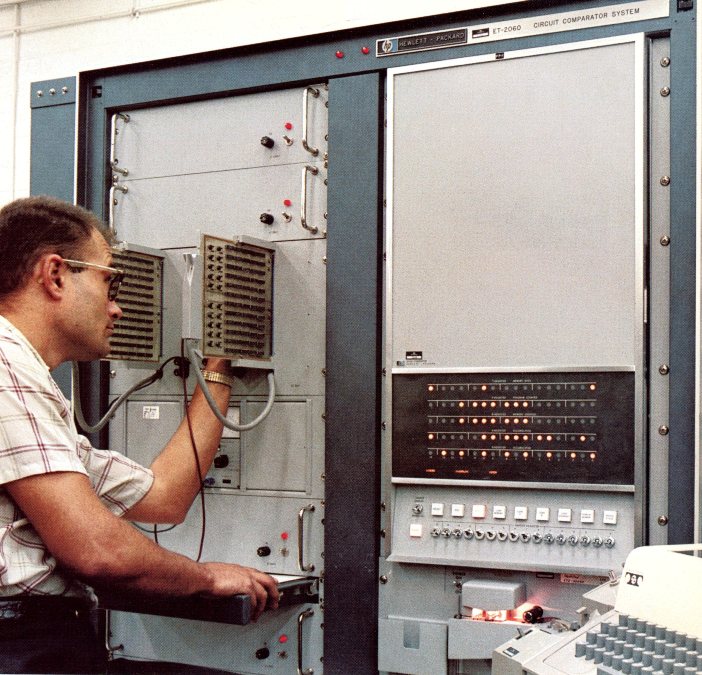