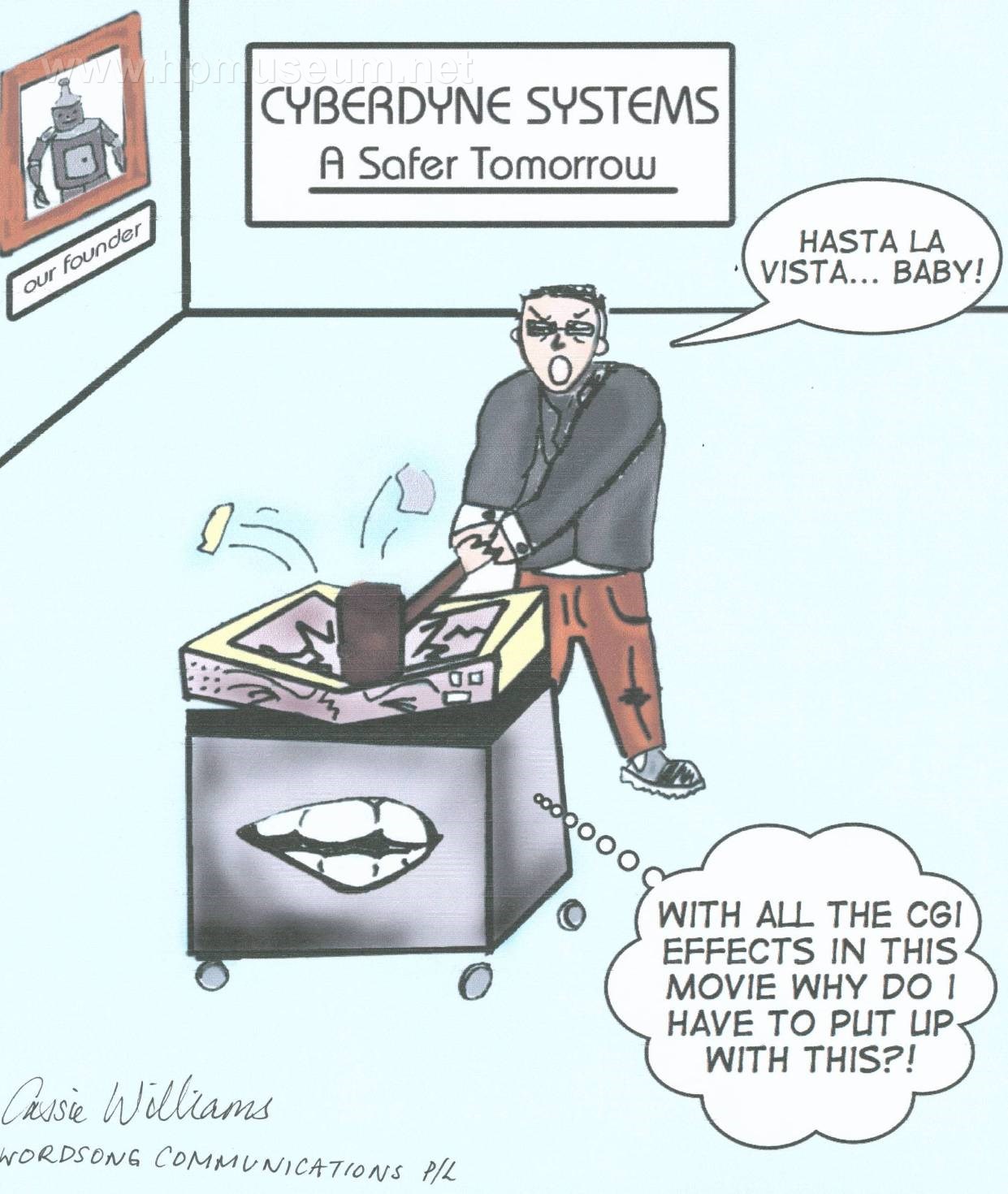 HP in the Movies:

HP products have appeared in the movies over the years. Some of these appearances were by chance; others were by designed product placements. Most of these appearances lasted only a few seconds. You need to keep a very sharp eye open to catch them. Below is a list of some movies in which HP products have appeared. Please contact us if you know of others.

The Andromeda Strain (1971). This sci-fi thriller begins with a 9100B calculator identifying the location of the outbreak. The location is pinpointed on a map by the 9125A plotter using some dramatic pen-up, pen-down motions. View 20 second clip (2.5 Mb). 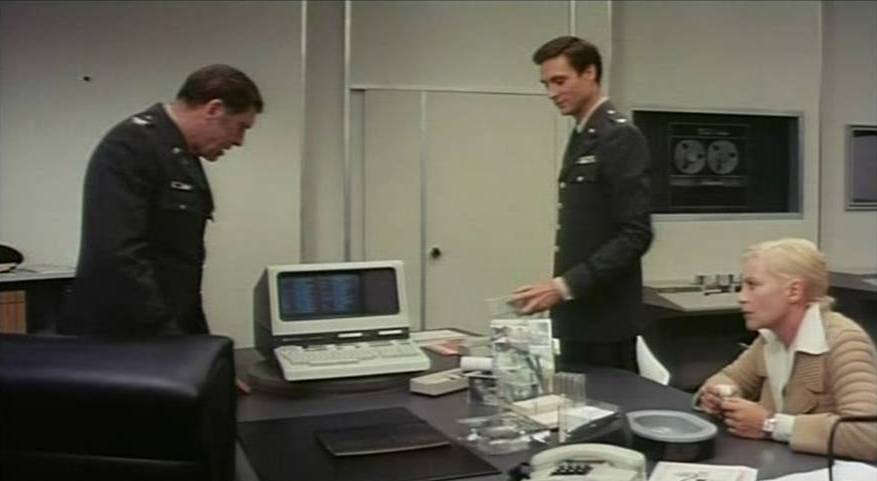 The Cassandra Crossing (1976). This action thriller movie “features” the 2645A Terminal displaying key information about terrorists on a train. Academy award winner Burt Lancaster was upstaged by the great machine and never starred in another movie that included an HP product. View 18 second clip (2.4 Mb). 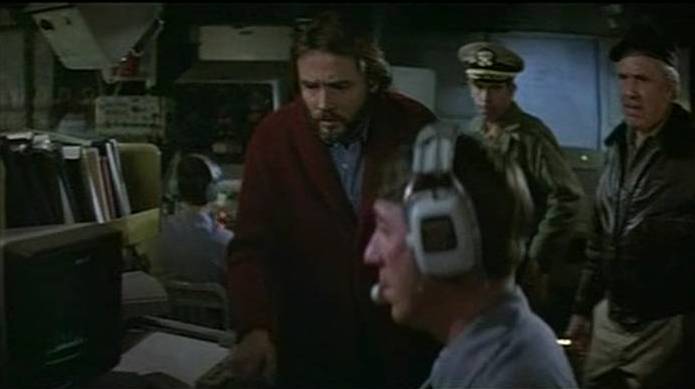 Raise The Titanic (1980). Despite a strong cast, this movie bombed at the box office. Several HP products appear in the film, including X-Y recorders, a 9872A and a 3964A tape recorder. However, the star of the film was the 9845B. During the most tense part of the movie, the key characters look at the 9845 screen as it redraws the Titanic's profile just as it is being lifted from the sea bed. Programing for the 9845 screen drawing was done by HP employee Cindi Lund. Inclusion of this classic "HP Movie" was suggested by Tom Tremble of San Diego, California. View 32 second clip (4.1 Mb).

Wargames (1983). This Matthew Broderick movie does not show any HP computers (although it does show an NEC-branded version of the 82912A monitor). All of the color computer graphics showing maps and ICBM trails were created using the 9845C computer. View 25 second clip (2 Mb). For more background on this movie, visit http://www.imsai.net/movies/wargames.htm. 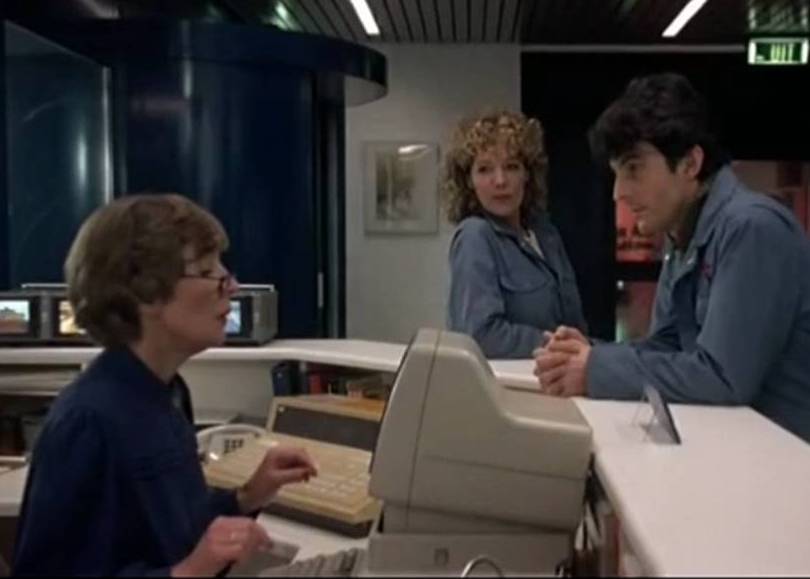 Die Lift (1983). This Dutch film is about a haunted elevator. It features an HP-120 computer at reception check in. View 20 second clip (2.5 Mb). This film was nominated by everyone's favorite Dutch HP preservationist - Rik Bos. 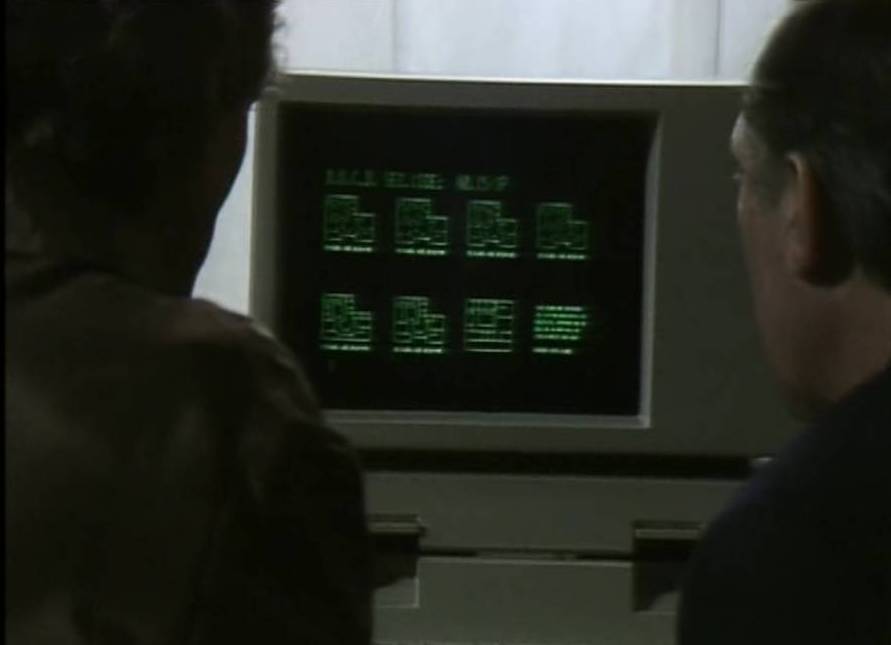 Bird of Prey 2 (1984). This British mini-series ran for four episodes in September of 1984.  The 9836C computer features very prominiently in one of the episodes.  View 48 second clip (6 MB). This TV show was suggested by James Carter in the UK. 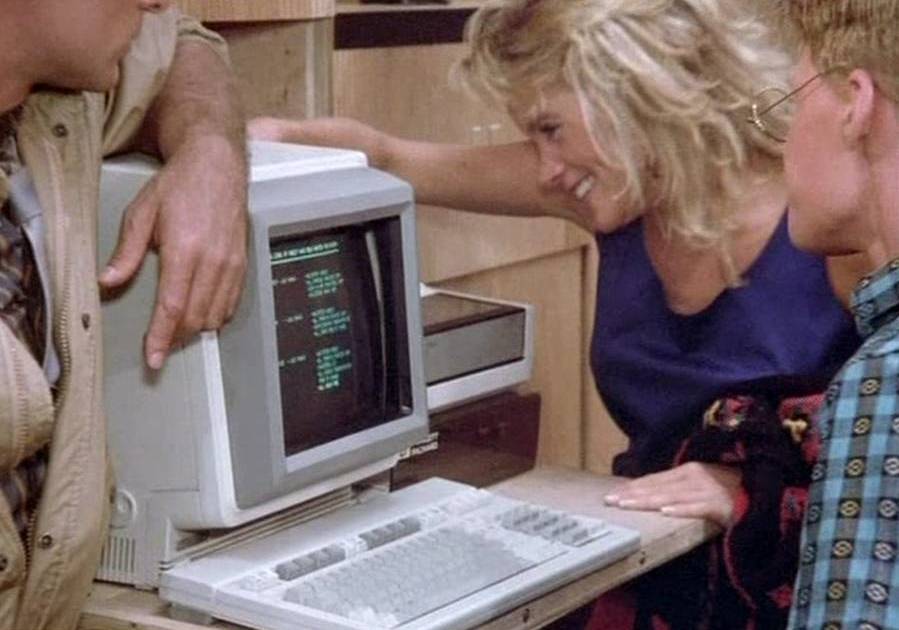 Kamikaze (1986). In this French movie, a crazy, old and bored scientist invents a system which allows him to reach through the airwaves and transform live TV cameras into weapons to kill whomever is being filmed. The opening sequence was filmed at the HP offices in Villepinte France, north of Paris (ref Philippe Malenfant) where you can see Vectras, HP 150, HP 150II, 264X terminals, 7970 tape drive, 2631 printers and even a 9121S disc drive. View 45 second clip (8.8 Mb). This scene shows the crazy scientist working with his 150 II PC where he changes the graphics demo screen from a horizontal bar chart to a pie chart (very devious!). View 32 second clip (6.7 Mb). This movie was suggested by James Carter in the UK. 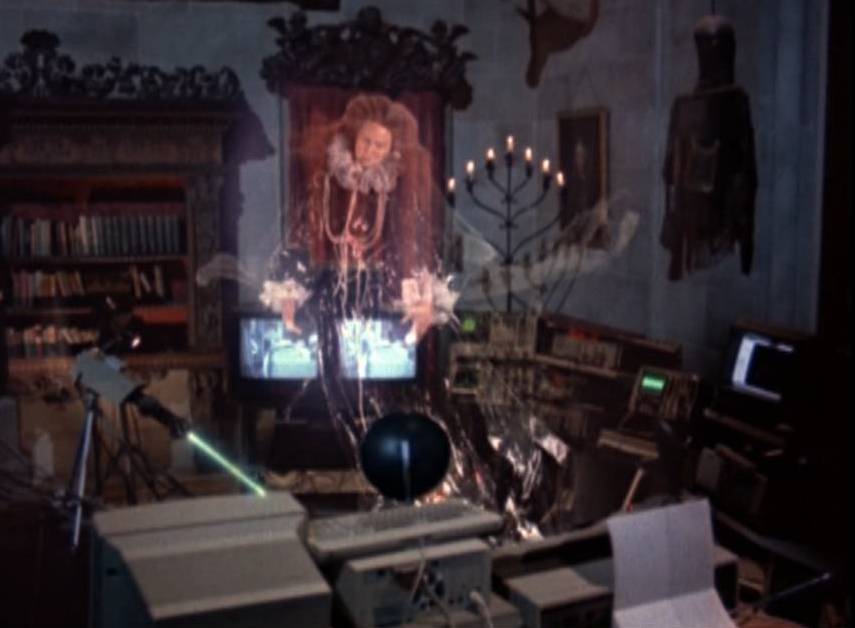 The Canterville Ghost (1986). The local professor uses a number of HP instruments as well as a rare 9837H to try and capture the castle ghost. Also featured are a Touchscreen II computer as well as 2934 and ThinkJet printers. View 17 second clip (3 Mb). This movie was suggested by Robert Van Mellaert of Belgium.

Wall Street (1987). Wall Street does not show any HP products. However, the HP share price gets a mention and commentary in the “Escort taxi” scene. View 33 second clip (4.2 Mb). 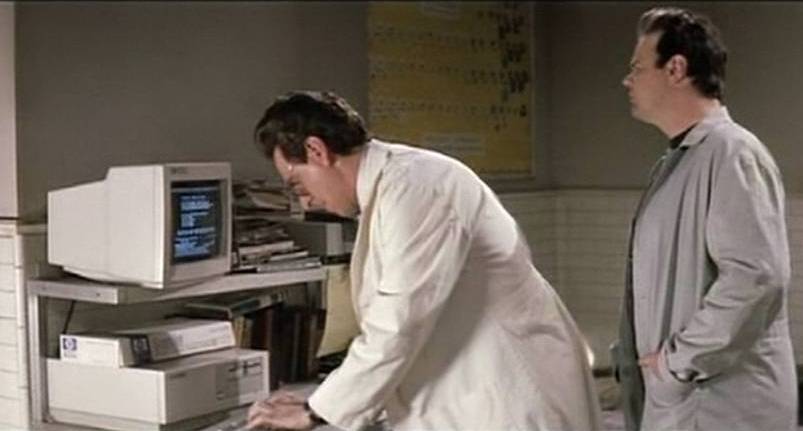 Ghostbusters II (1989). HP Vectra appears in both office and lab scenes. An HP monitor with an oversized logo also sits atop a ScanJet interface box. Perhaps this movie featured HP equipment because of its previous experience hunting ghosts in The Canterville Ghost! View 28 second clip (3.6 Mb).

Terminator II (1991). HP mass storage drives (7920 and 7935 class) are featured in the office demolition scene when the Terminator takes an axe to the computer equipment of Cyberdyne Systems. 7970 tape drives can also be seen in the background. Note: this treatment is not considered normal use and voids the factory warranty! View 16 second clip (2.1 Mb). 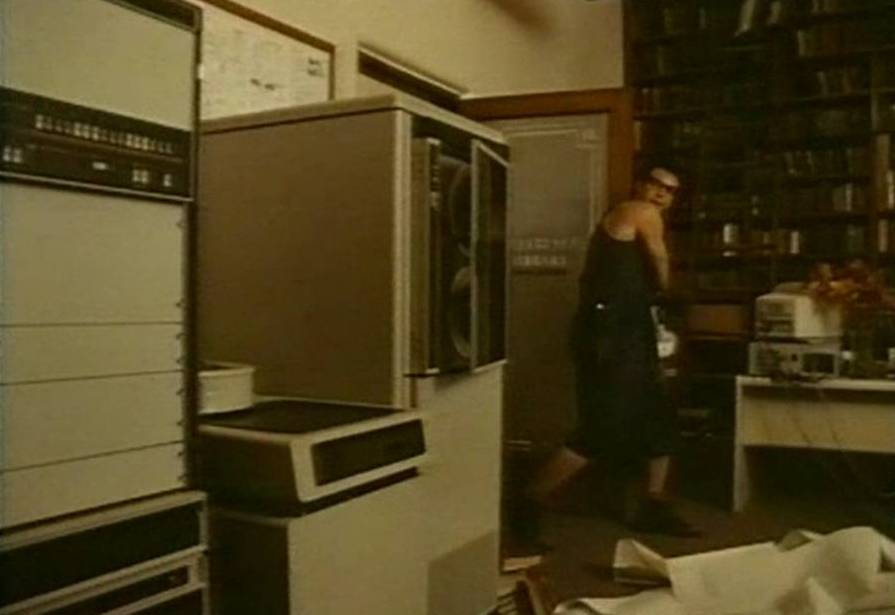 My Cousin Vinny (1992). This movie does not show any HP products or mention HP computers. The HP 5710A gas chromatograph gets a strong mention supporting the case of the prosecution (bad guys) in a court scene. View 16 second clip (2.1 Mb). 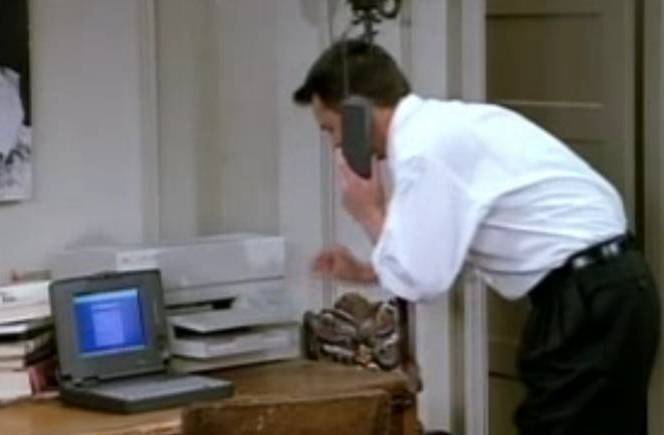 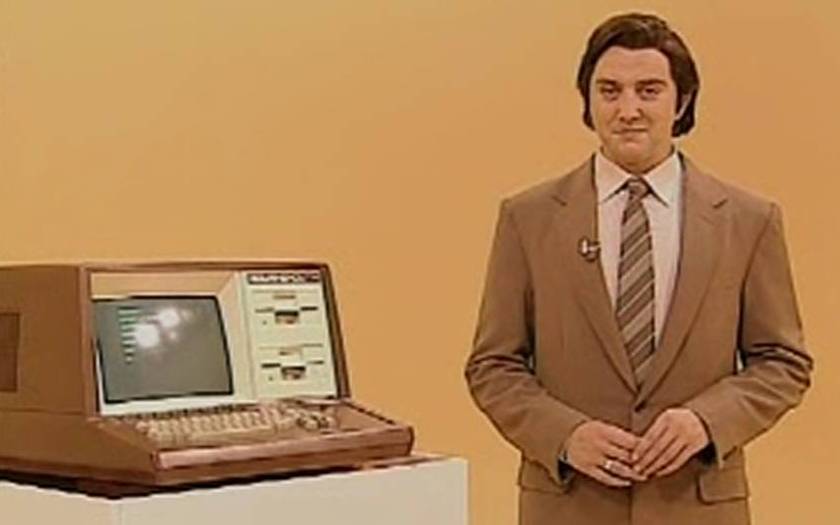 Look Around You (2005). Season 2 (episode 5) of this British comedy series features a working 64000 as Britain's most technologically advanced computer (this is the 64000 configured with dual floppies), named "Bournemouth". During the episode, Bournemouth escapes from a steel cage. The program predicts that there might be as many as 10,000 computers in Britain alone by 1990. View 33 second clip (4.5 Mb) This TV show was suggested by James Carter in the UK. 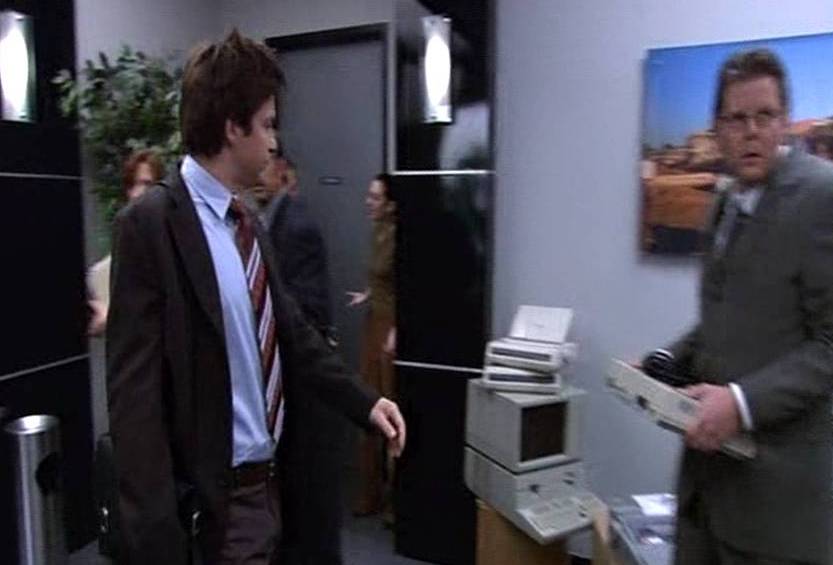 Arrested Development (2006). Season 3 (episode Family Ties). Michael returns to the office to see that his father has ordered the erasing of all the computers' hard discs. The computers are mostly classics from the 1980s, including the 9836. The 9836 is the first computer that comes into view as Michael enters. View 19 second clip (3.9 Mb) 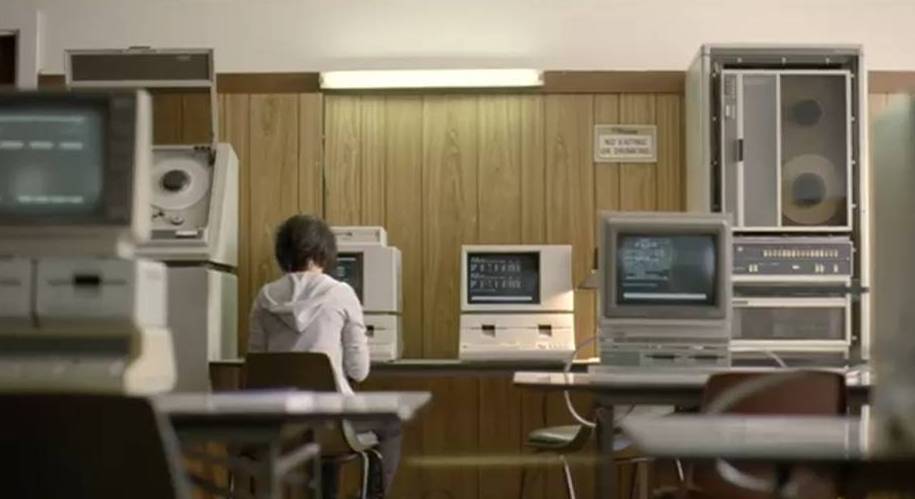 To view the world's best collection of old computers starring on screen, be sure to visit James Carters' Starring The Computer.